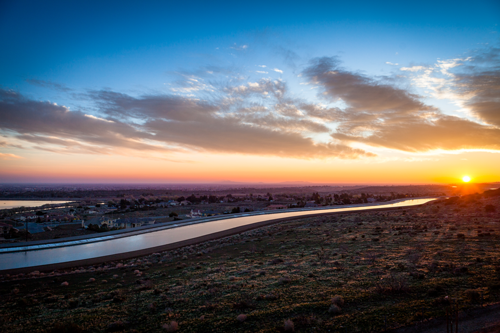 The Delta Conveyance Project is DWR’s and Governor Newsom’s plan to build an underground tunnel to bring water from the Sacramento-San Joaquin Delta to the State Water Project pumps near Tracy in order to reduce the risk from earthquakes and climate change to the State’s water supplies. It is intended to protect water supplies to millions of Californians in an area that includes Silicon Valley, prime agricultural farmland in central California, and most of southern California. Newsom and DWR hope this project has more success than its past iterations – including the Peripheral Canal, the Bay Delta Conservation Plan, and the California Water Fix. Newsom overhauled the California Water Fix, which was his predecessor Jerry Brown’s plan for two tunnels, shortly after entering office in 2019.

One substantial difference from Governor Brown’s plan is that the Delta Conveyance Project will be only one tunnel. That tunnel will be 45 miles long and 39 feet high and buried underground. While DWR has not released any price estimates, the expectation is the price tag for the project will be roughly $16 billion. That price would be paid by the recipients of the water from the project, including the Metropolitan Water District of Southern California, which is the largest wholesaler of water in the United States, serving 19 million people.

DWR lays out much of the justification for the project in a press release. The benefits of the project include modernizing State Water Project infrastructure, adapting to climate change, protecting Southern California’s water supply in the case of an earthquake, and capturing water from severe storms that would otherwise escape to the ocean. The last point is the key one – the project is primarily focused on moving that water during high flow conditions that is not being utilized by other water users. For example, DWR notes that it could have captured 236,000 acre-feet of water from the big storms in October and December of 2021. DWR explains that water is enough for 2.5 million people for a year, but standard industry estimates put it at closer to 700,000-800,000 people.

Opponents of the project have raised concern about community and wildlife impacts, for example, noting construction would require removal of 15 homes, 56 other buildings, take over 2,340 acres of farmland, and run through sites of cultural significance to tribal communities. That said, over time the State has made a series of refinements to the project to reduce such impacts where feasible.  Opponents also have voiced skepticism about DWR’s claims about the limits on the water the project will use. But there are multiple federal and state agencies that have a role in determining the amount of water the Department of Water Resources will be able to deliver through the project and assuring such deliveries comply with requirements to protect water quality, wildlife, and the rights of other water users in the watershed.

The Draft EIR is currently open for public comment, with the 90-day period ending on October 27. The Draft EIR is part of the California Environmental Quality Act (CEQA) review process. In the best case scenario, the project would break ground in 2028 and take roughly 12 years to complete. However, it is also likely that process will be delayed by CEQA, and other, lawsuits. Only time will tell whether the Delta Conveyance Project is the project that finally accomplishes the goals imagined nearly 60 years ago, or if it will meet the same fate as its predecessors.